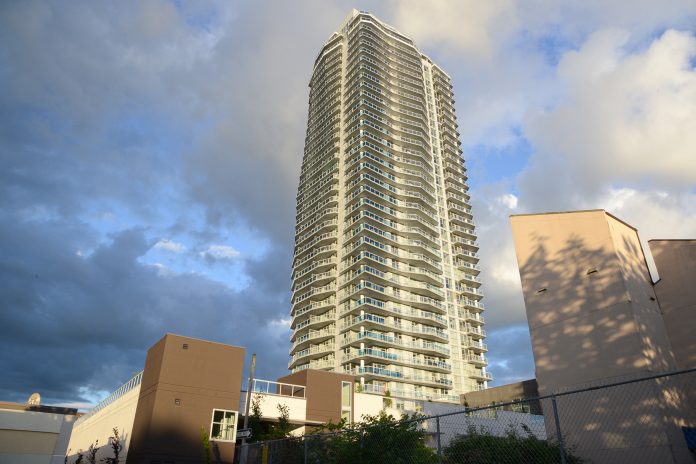 “With a host of amenities and transit within footsteps, we envision North Delta as being a hub and ideal spot to live, that people will gravitate to,” said Hari Sharma, Maple Leaf Homes’ Principal and developer behind the Delta Rise.

The development provides residents with amazing views of the lower mainland and beyond from the 317 single-level homes. It includes an outdoor park and recreation space for residents well above street level. Efficient floor plans and European inspired kitchens have drawn significant public response and will become home to a vibrant, intergenerational community and directly contribute to Delta’s plans for revitalization of the corridor. This residential offering will allow citizens to age in the community and retain a Delta address, even as their needs change. There is also a new street, Sharma Boulevard, for southern access to the Delta Shopper Mall.

The single family detached residence is no longer the affordable option for home ownership. Condos have taken their place in the communities of Greater Vancouver. In North Delta a thirty-seven story building has become the newest landmark on the skyline. 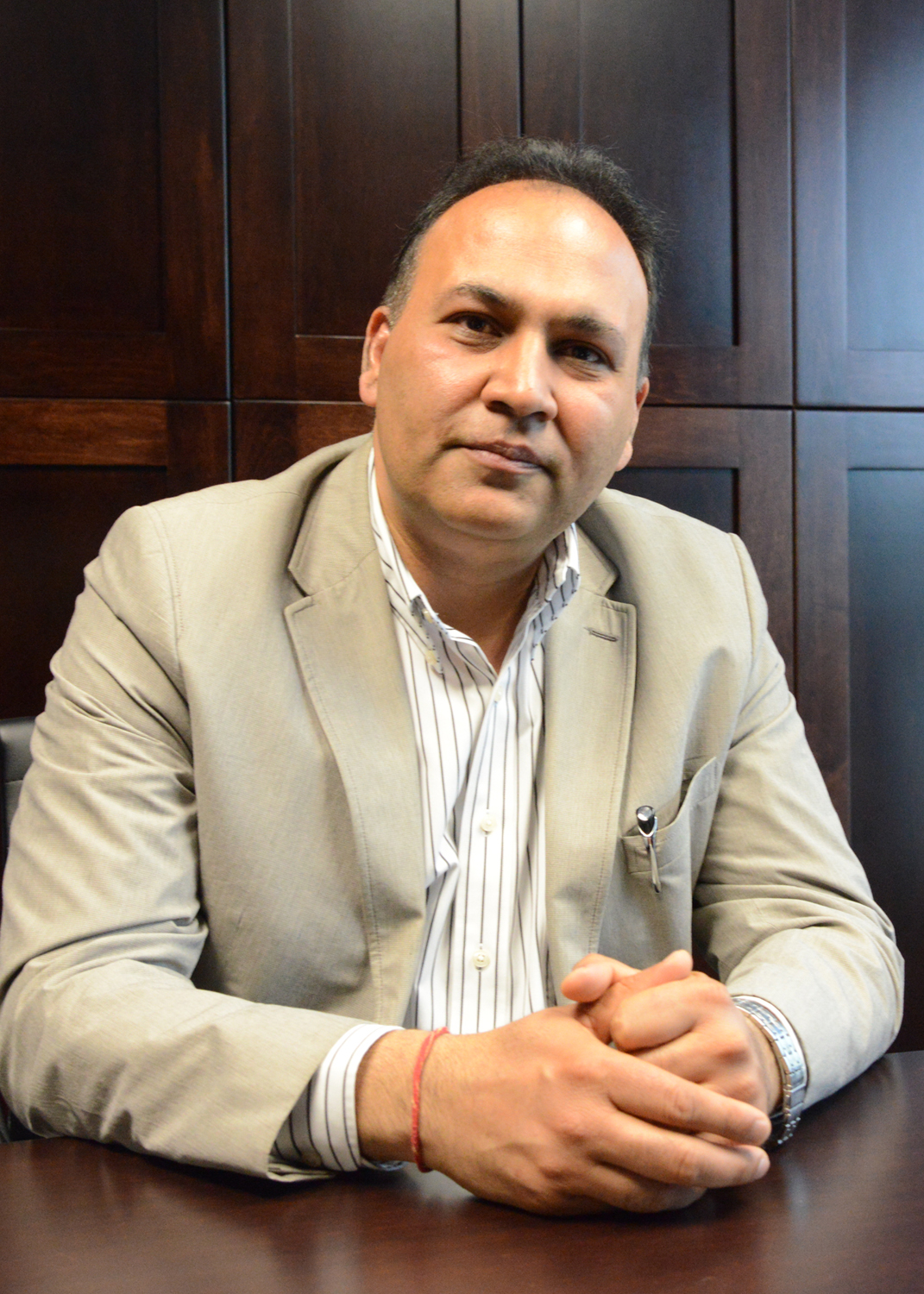 Satish Sharma, in partnership with his brother Hari, have been building homes under the name Maple Leaf Homes, since 1992. He spoke with Ray Hudson about the family operation and one of the unique high-rise buildings in the south Fraser, called the Delta Rise.

SS: We started building single family homes, and then became involved on the development and accounting side as Sharma & Associates (Satish is a Chartered General Accountant), and Hari, with his real estate and property management licences, was doing the real estate side. We always find rather than investing in stocks and bonds, investing in real estate is something you can touch and feel.
We serve the community that we live in. Our philosophy has always been ‘Invest Locally’ because, when you do, you’re creating jobs locally. When we do a project here, we’re giving the work to a local cabinet maker, framer or local window company. These are the people who are using our product, so it makes sense to create a job for them locally. That’s literally building the community. I’m always glad to be building in an area where we have so many co-operating partners such as the cities of Delta or Surrey. It’s good to see that they have the vision that is common with what we’re trying to do.

RH: How have the residential communities changed since 1992?

SS: When the Delta Rise came into our vision, we had a meeting with Delta who had a market void in their community because the young families with little kids who had grown up in the community, had been living with their parents and now were looking to buy their own home. The only problem is, they couldn’t afford to.
It was the same thing with the down-sizers. As they get older they are trying to get away from climbing stairs and cutting lawns. But there are few options available, so they were looking for single level living spaces. The people in the planning department saw that people were leaving the community because there were no options and that’s where the Delta Rise option came out to fill that market void.

RH: In the initial concept were you thinking thirty-seven stories?

SS: No. We had a six story building approved on the site based on what we had done on the other side of Scott Road, where we had built a 77 unit and 53 unit apartment building at 120A and 82nd, so we were comfortable with developing six stories. It was Delta Council who said this was a key piece of property and why were we under-developing it? So we said we’d do a study on market absorption and if the demand was there we’d definitely go higher than six stories. We went back to the drawing board, did some studies and were able to say that there was quite a void in the market, and that we could do more to produce this much housing.

RH: What were some of the challenges in building the project.

SS: I wouldn’t say there were any challenges, rather there were interesting experiences. We did struggle because a lot of the people had never purchased a pre-sale before. A lot of our work was educating the purchasers about the new way of real estate. To build such a big tower you need some presales, so you need to make the community comfortable with the idea that “you are paying me money now and I’ll deliver the house three years from now.” For many their experiences were being in the market twenty years ago so they were definitely not up to date with the way things operate now.

RH: Have you got any other projects in the works?

SS: We are looking at another development, called Delta Gardens, 122 homes, on 84th Avenue and 115th Street, right next to North Delta Rec Centre. We will demolish the old firehall, and along with the “Gardens” project, we’re building a new art center for North Delta. The whole project will be adjacent to the North Delta Rec Centre, and within easy walking distance to Nordel Centre.
One thing we learned from developing Delta Rise, was what purchasers were looking for. Some of the people had a height phobia and wanted to live on a first, second or third floor, so that’s the reason we kept the Delta Gardens development to six stories. Another issue arose from people who were facing moving from larger homes, 2,500 sq ft and up, to homes of 600 or 800 sq ft. So to avoid space-shock by the purchasers, the Delta Gardens will have 1,200 and 1,300 sq ft homes. Perhaps we should have realized that in Delta Rise but at least we learned from that and the new development will allow for an easier transition.

RH: What do you see happening in developments over the next five years?

SS: I think a good community needs good housing that the community can afford so people can stay in the community. I think the Delta council understands that. So by understanding these things they’re finding that these single family homes are not affordable by our young people. If they want the younger people and the young families to stay in the community, they’ll need to offer the kind of housing which they can afford. Change has to happen. Who ever thought we’d see a tear-down Delta box going for $850 to $900,000.

RH: I want to go back to the Delta Rise and some of the features residents will enjoy. First where did the idea of a park three floors above the street come from?

SS: Delta Rise is like a village with all the amenities in the building. Someone living in the Delta Rise has access to a secure half acre private park, with great views, situated three floors above the traffic. It’s a meeting place for the neighbours, a place to exercise, putt a ball and more, in the fresh air. On the ground floor there will be a large coffee shop so residents can even come down in their PJs and meet someone if they wish. You’ll even be able to order your coffee on an app so it’s ready when you get there.

RH: Are there some special features in the Delta Gardens project as well?

SS: We will have a water feature and zen garden in the centre of the complex where people can sit and relax. The North Delta Rec Centre, right next door, provides a huge amenity.
I would like to say the Corporation of Delta are doing a great job in both listening to the residents and identifying what the community needs. And although I can’t say for certain, I believe the majority of the home owners in the Delta Rise are from North Delta. At the end of the day, if you are developing something the residents want, the city will be with you as well. 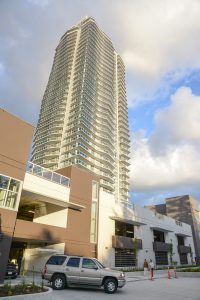 Our vision is always to develop something that appeals to the customer. At the opening of the Delta Rise we had councillors from all over the valley, some saying that they liked the Delta Rise and wished they could have something similar in their cities as well.
When we were marketing the project, we learned a great deal. We sold over three hundred homes in the Delta Rise, but talked to over two or three thousand others who visited the sales centre. We listened to what they had to say, collected their comments, and applied a lot of what they said to the design of the Delta Gardens project. And because we listen and learn, that project will probably be over-subscribed there as well.

Virtual Tours and Live Streams a Hit on REALTOR.ca

Visitor Centres Across the Province to Benefit from $130,000 in Funding from Destination BC